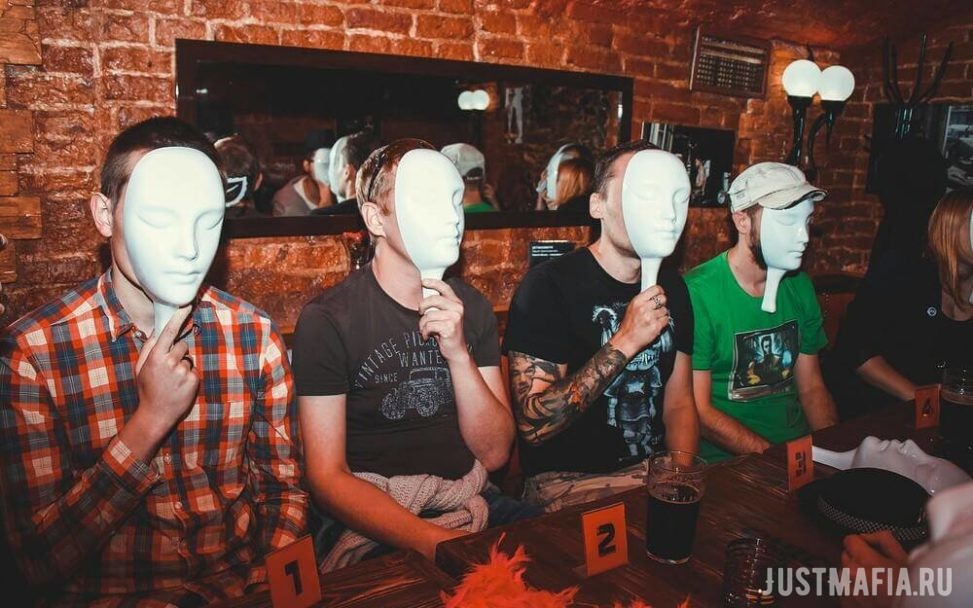 Rules are rules, but the Moderator is always right!

Once upon a time, there was a peaceful city that was invaded by Mafia. To save themselves from peril, the Good Citizens had no choice, but to find and eliminate all the mafiosi. Should they fail, the Mob will succeed in taking over their town.

The game revolves around alternating day and night phases. During the daytime, all the players take part in an open discussion, as they attempt to seek out and eliminate the members of Mafia. When the night falls, all the players go to sleep, however, some awaken as they follow the Moderator’s instructions and perform their game functions. Each player gets a card with their character on it, in the beginning of every new game.
There is a great variety of roles and rules to follow and it’s up to the Moderator to explain and give timely instructions in each case.

When the night is over, everyone wakes up and a daytime discussion begins. The Civilians try to find the Mafia members amongst them. The mafiosi pretend to be regular, law abiding Citizens like the rest, as they try to confuse the others.
Players will need to use many psychological methods such as intuition, reasoning and provocations during the discussion, to find out who their neighbors really are. The more dynamic the discussion, the higher are the chances that the Innocents can expose the criminals and save their city.

Before the daytime discussion comes to an end, each player takes a turn to speak out. He or a she can share their suspicions, or perhaps defend themselves and even suggest a player to be voted against. After everyone has expressed their opinion, the voting for the nominated suspects commences. The one who gets the majority of the votes is considered to be lynched. At that point he must surrender his role card and leave the game. 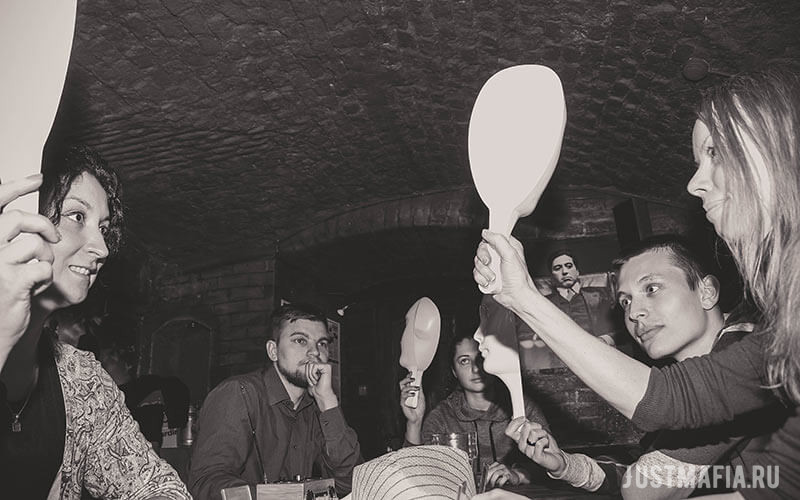 The Civilians, Plain Citizens, the Innocents (the red team). They are the majority, but they don’t know who is who. The Innocents don’t wake up at night, they only take part in the daytime discussions as they try to oust the mobsters.

Mafia (the black team). Mafia wins if it eliminates all the Civilians, or if the population of Good Citizens left alive is equal to the amount of mobsters still in the game.
During the day, the mafiosi pretend to represent the interests of the red team, but as the night falls, when prompted, they awaken and select their victim. They plot their dirty deed silently and only use gestures to communicate with each other, because making any noise will undoubtedly give them away.
The Moderator takes note of their pick and they all go back to sleep.

The Mafia Boss (the black team). The Mafia Boss has two special functions. The first, is to make the final decision on which player should be assassinated in case the other mobsters can’t make up their minds. Secondly, he awakens separately from the rest of his clan to seek out the Detective, the leader of the red team. Each night he points at a player, who he thinks might be the Detective and receives either a negative, or a positive reply from the Moderator. Should he succeed in his search, he may try to persuade the Good Citizens to vote against that player, or to shoot him the following night when the Mafia wakes up.

The Detective (the red team). The Detective is authorized by his community to awaken separately, so he can check out any player and see whether he is a Mafia member, or not. The Detective doesn’t shoot anybody and he can only receive either a negative or a positive reply from the Moderator regarding the one he checks. If he should find a criminal, it is his duty to convince the other Citizens to vote against that player in the daytime. The Detective however, should be extremely cautious, not to reveal his own identity.

The Doctor (the red team). This character has an ability to rescue Citizens. Every night, the doctor tries to guess who is to be executed by the Mafia that night. He points to a player he’d like to protect. Should he succeed in helping the right person, there will be no (or less) victims in the morning.
Doctor can’t save the same player over two consecutive nights. Doctor is able to protect himself, but only once in a game.

There’s also a grey team of characters, playing for themselves. One of the most popular self-team roles is the Maniac. His goal is to be left face-to-face with an Innocent Citizen. The Maniac awakens when his turn comes up and selects a victim, which can be either a Civilian, or a mafioso. The Maniac has two special features: his victim can’t be rescued by the Doctor and he’s always a Plain Citizen if the Detective checks him.


When you play the children’s version, the role of the Maniac should either be approved by the parents, or at least replaced by another character.

The above are only some of the many available Game’s Characters. Their amount and their proportion, depend on the total number of players, so there are many more additional roles you may get from the Moderator.

The function of the Moderator is to keep track and manage the game, maintain discipline, give timely instructions as he guides the essential parts of the game process. For example, when a player is speaking during his personal minute, all others are prohibited from talking or any energetic gesturing.

It is also up to the moderator to create the city of your dreams, while keeping the playing process flowing smoothly and ensuring that you will enjoy your stay there, no matter what your role is. 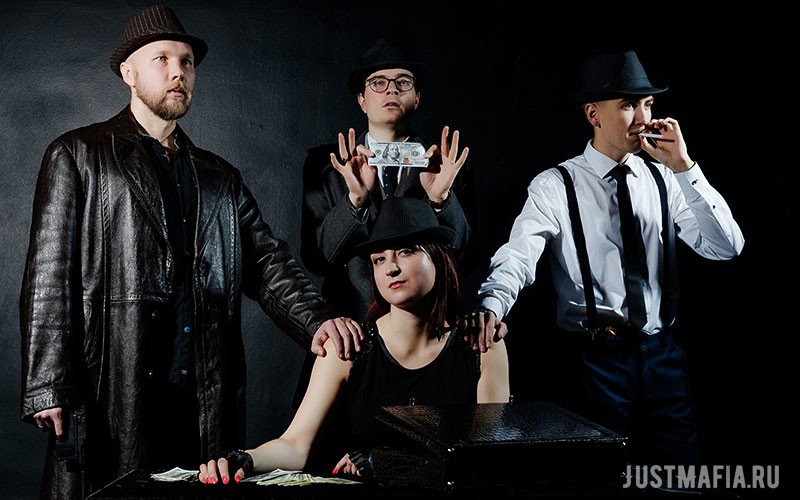 The Moderator is always right!