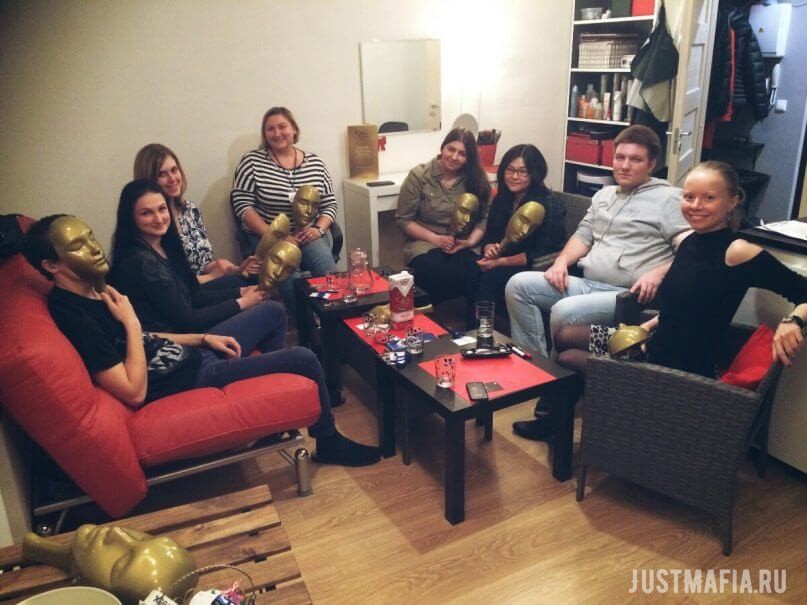 Dear friends, thank you for the wonderful Saturday evening! It was not just a Mafia game, but a fun, warm and friendly meeting. Some participants even found their fellow countrymen there.
It was a pleasant surprise for me that there are such open-hearted, inquisitive and witty English-speakers living in our Kudrovo village.

And as true villagers, our players could not choose any other place for their game but a village! A beautiful Italian village. I’m sure the readers are eager to find out whether Mafia or plain citizens have won, so let’s get straight to the point!

There were 8 residents in our village.

The first one, Tanya, introduced herself as a farmer. She was a calm and sensible player with an adequate level of English. Unfortunately, Mafia killed the farmer on the very first night: they had obviously been frightened of her outstanding abilities.

The second player, Alexandra, said she was a housewife with 8 children (seems it was a magical number that evening) and immediately became number one suspect for the rest of the company. Nevertheless, she managed to survive till the end of the game as an honest citizen.

The third villager, Nata, identified herself as a banker — and this occupation appeared to be suspicious, too. Have you ever met bankers in the village? Neither had the players, so Nata was at risk during the whole game process, especially when she stopped smiling: that was totally unacceptable.

The fourth resident, Elena, dreamt to be an artist on the bank of the peaceful Italian river, though in fact she was a real mafioso. Using her fluent English with a copious vocabulary, she managed to outlive her unlucky partner by two nights and commit two murders accordingly.

The fifth person, Daniil, decided to remain an engineer even in the game. He approved himself as an energetic player, but not for long — the citizens, abstained from voting, lynched him after the first day discussion. And that was not in vain, as Daniil turned out to be the first revealed mafioso!

The sixth player, Dmitry, was as active and as pushing as usual. Besides, he showed himself to be a quick learner, especially when it was time to vote.

The seventh villager, Alexander, didn’t mean to participate in the game at all. He just happened to be round and took a chance to spend a jolly evening with a group of English-speaking people. And by his own admission, he did not regret that at all. Despite the language level, insufficient to speak, Alexander did his best to understand other players and to create a friendly ambience.

The eighth resident, Dasha, imagined she was an owner of a small Italian cafe. She spoke English pretty well and supported women but it didn’t save her from Elena on the second night.
Fortunately, Alexandra noticed that Dmitry was too aggressive to be Mafia, so she made a wise choice and accused Elena instead of him.
Other innocent survivors joined her in the voting and Mafia was defeated!

That was a great encouraging start of Kudrovo English-speaking club. Hope we will meet again and continue our fabulous activities!